Triggering behavior change one person at a time

**There’s a word in this story that you might not use regularly at your dinner table. Still, it needs to be shared as it came to us. In many cultures, the “sh” word is a PG word – a socially acceptable synonym for poopie, do-do, and crap.

One activity that is incorporated into all Lifewater programs is an activity called, Triggering. It’s a somewhat uncomfortable activity where community members walk around together and point out all the places of open defecation. And in the communities suffering from acute sanitation and water-related diseases, there is a A LOT of feces.

Triggering happens at the beginning of a program in a community. Lifewater staff shows the community how feces contaminates the environment, including how it can be unintentionally ingested because of flies, unsafe water storage, and unwashed hands. 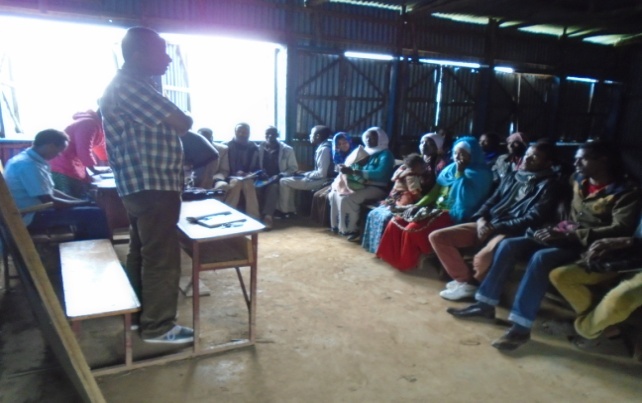 This often involves the object lesson of scraping some of the human feces found on the ground and putting it in a bottle filled with water. The question is then asked, “Does anybody want to drink this”?

Mr. Galgalu Woticha lives in West Arsi, Ethiopia. He is a 60 year-old farmer with a large family. During a triggering event in Feb 2016, a Lifewater field staff member recorded his name as the dirtiest household in the town. Later that year, Mr. Galgalu showed us around his compounds and told us how his sanitation conditions improved.

“I was born and brought up in this village. I am married and am blessed with many children. In the past all of my family members were using bamboo and enset (false banana) plantations for defecation. In fact, kids defecate everywhere in the compound. I participated in the CLTS triggering which was conducted in our gare [village] in February 2016 and I realized that all my families were eating each others’ sh## (feces). Thanks to Lifewater staff member, Yeshihareg, who changed my mind by demonstrating the worst situations we were in. After that triggering my understanding about sanitation has changed. Now I have constructed 4 improved latrines (for his large family) and all my families are using it properly. I am a change maker to my gare. I already declared ODF (Open Defecation Free) compound. No more shame! No more fear! I started working on other five healthy home elements to become a healthy home.”

Because of your generosity, families like the Galgalu’s are being trained and making life-saving health changes in their homes. Families are healthier, have cleaner home environments, and are confident that they can make these changes on their own. This wouldn’t be possible without your generous support.

“If we get water, I will feel blessed. I know that my family will then be at peace and much happier.” - Faziira

“We would like to be healthy with safe water to enjoy our life.” - Chaltu

Rahel and her mother, Bernadette, know that unsafe water is a threat to their village.