Lifewater Home / Blog / The Connection Between Sanitation and AIDS Treatment

The Connection Between Sanitation and AIDS Treatment

Proper sanitation and AIDS treatment and prevention are deeply connected worldwide. Globally, over 35 million people now live with HIV/AIDS, and in 2012 approximately 1.6 million people died of HIV/AIDS-related illnesses.[1] Poor sanitation negatively affects those living with HIV/AIDS in significant ways. Those with compromised immune systems, such as HIV/AIDS patients, are more prone to common illnesses and diseases, especially diarrhea. In the least developed countries, up to 90 percent of AIDS patients in Africa suffer from chronic diarrheal diseases, which contributed to an increase in diarrheal deaths. [2]

Those living in developing nations are most affected by HIV/AIDS and represent the fastest growing population of HIV/AIDS patients. Access to adequate sanitation is limited in many communities with a high prevalence of HIV/AIDS, particularly those in rural areas in Sub-Saharan Africa. In addition to the risk posed by drinking unsafe water, individuals weakened and fatigued by poor sanitation and AIDS are not able to walk long distances to use proper sanitation facilities. When access to adequate sanitation facilities is available, fecal and oral transmission of diarrhea-causing agents may be prevented and diarrheal disease could subside, providing much needed relief to those suffering from HIV/AIDS. 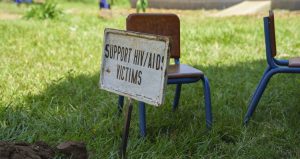 Additionally, without adequate sanitation and with the practice of open defecation, water sources are contaminated with harmful pathogens and safe water sources may be too far away for those with weakened bodies to travel. The care of AIDS in developing countries requires people to have access to clean, safe water nearby. Without safe water for cooking and drinking, the effectiveness of anti-retroviral treatments is lessened. Also, many mothers with HIV/AIDS prepare formula for infants instead of breastfeeding. When the formula is prepared with contaminated water, the infant is at risk of life-threatening water-borne diseases and diarrhea.

Without access to nearby adequate sanitation, those affected by HIV/AIDS have little hope of maintaining an acceptable quality of life. It is important that the fight against HIV/AIDS includes initiative to provide adequate sanitation facilities. As Lifewater continues to respond to the need for clean water, adequate sanitation, and hygiene around the world, the incidence of water-borne diseases decrease, life expectancy increases, and hope for the future is restored in the midst of this deadly illness.