Lifewater Home / Blog / “This Is A Story Of God’s Faithfulness”

“This Is A Story Of God’s Faithfulness”

Every year at Christmas, singer and performer Mark Shelton asked his wife, Lisa Joy, what she wanted for Christmas. And every year, the answer was always the same. She always wanted to give her Christmas gift to sponsor animals for families in developing countries.

Each year, Lisa wept with joy as she opened up a picture of someone with the donated animal. Mark watched her face and knew he’d married the most generous and loving woman. “If she asked for things, it was always for someone else,” said Mark.

But in 2014, her response was different. Lisa said this time she wanted a community in Africa to have a well with clean water. That year was different for many reasons, because Lisa had been diagnosed with stage 4 lung cancer. The Sheltons were in the midst of believing that God would heal her, in between long commutes from their home in northeast Vermont to the Dana-Farber Cancer Institute in Boston.

“God delivers, God is faithful, God takes care of us,” Mark said. He wanted to make her wish for a well come true, but Lisa’s condition was worsening. Not long after, God took Lisa Joy Shelton home on January 7, 2020. 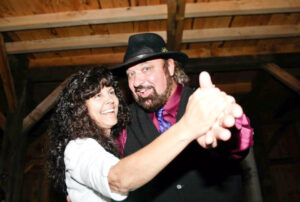 When he could, Mark started looking into organizations that constructed wells in Africa, scouting around for a company he could trust. Mark, an accomplished Elvis impersonator and retiree of a long and varied career in law enforcement, laughed, “I have a forty year background in criminal justice. I love everybody but authenticity is important.” Mark wanted a company that would tell him where the money was going.

One day Mark contacted Lifewater International, who told him that it would cost $20,000 dollars to sponsor a well and he would know the exact community that benefited from his donation.

Thankful to have found an organization he could trust, Mark told the Lifewater team he would get back in touch once God had provided the money.

In the meantime, the COVID-19 pandemic struck. Mark, a long-time performer who loved singing with Lisa, started giving Facebook Live concerts for anyone who needed a reminder that God was with them. Still, there was no way at that time to raise money for the well.

But then, a friend suggested Mark tell his viewers about Lisa’s dream for a clean water well in Africa.  Mark began including Lisa’s dream during his Facebook Live shows.

“Next thing I know,” Mark said, “money’s coming in.” It came from everywhere, $1 from Argentina, 25 pounds from England, $1000 dollars from Canada. As he was nearing his goal, Mark held a live auction. The bidding raised $2600 dollars, reaching the $20,000 goal with some to spare.

LEARN HOW YOU CAN PARTNER WITH COMMUNITIES IN NEED >

In September of 2020, Mark called Lifewater back. To Mark’s surprise, Lifewater stated that $20,000 would not just cover the costs for a well, but for a full village sponsorship. Through Lifewater’s sustainable, grassroots approach to solving the global water and sanitation crisis, Mark’s gift allowed him and Lisa to partner with an entire village for real, lasting change. The Vision of a Healthy Village approach includes hygiene education, healthy home certification, training the local church to be a resource within the community, and a uniquely designed water point.

Thanks to Mark and Lisa 312 people living in Namuganza Moja village in Uganda, have safe water, health, and lasting hope.

“No matter what happens,” Mark said, choking up, “My life has to have been defined as blessed because I was married to Lisa Joy.”

Mark is adamant that this is not the story of a man who impersonates Elvis to honor the memory of his departed wife.

“The faithfulness of God through all this is really the story here,” Mark said.

We are so grateful for sacrificial donors like the Shelton’s who partner with communities to provide clean water, health, and lasting hope. Through their gifts, Lisa’s legacy will live on for generations to come.

“Sometimes we lose hope of being happy in our homes.” - Joyce